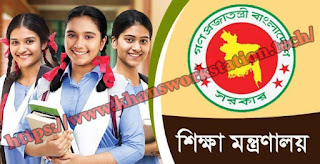 The Department of Primary Education (DPE) is taking new initiatives to reduce the suffering of primary students. From now on, DPE has taken initiative to distribute stipend money to students through mobile banking service 'Nagad Financial Apps BD'.

The department says there is a delay in sending money through other channels. When sent in cash, students' money will go directly to their account and they can withdraw it whenever they want. The cost will be reduced.

It is learned that for the last few years, the stipend was being paid through 'SureCash' mobile financial services. However, for cash out charge and data management, the government had to pay them a total of BDT 21,000 per thousand. However, ‘cash’ will provide the entire service for only seven and a half rupees per thousand.

For cash out of the stipend money of the students, SureCash would get 1.75 percent of the total stipend from the government, i.e. one thousand and eighteen thousand rupees. With this, they used to charge 3 rupees per thousand for data processing. But the whole service will be 'cash' for seven and a half thousand Bangladeshi Taka. However, the extra cash required for cash out will be paid from their own funds. Under the new agreement, stipends from April to December will also be distributed in cash.

According to the Department of Primary Education, 13 million primary school students receive stipends in this process every year. In all, the government spent about four thousand crore rupees. In this regard, the Ministry of Primary and Mass Education sent a summary to the Prime Minister with two alternative proposals. In their proposal, it is proposed to give cash in open tender method or OTM system. Then the Prime Minister instructed to give the job to 'cash' considering the government institution.

Sources in the Ministry of Primary and Mass Education said that in the last three years, they have received numerous complaints about the distribution of stipends through SureCash. There are various allegations including not having enough agent points for cash out or agents keeping extra money from students.

Director General of the Department of Primary Education Alamgir Mohammad Mansurul Alam said, "We have taken this initiative on the instructions of the Prime Minister." From now on we will pay through government agencies. We will pay the arrears in cash soon. '